A texture pack that works with free Seus PTGI shaders and support its Raytracing features for more realistic graphics.

Realism Mats texture pack is now known as the best, most stunning, and overall most realistic texture pack made for Minecraft. Realism Mats texture pack completely re-does most of the previous textures in Minecraft and produces astonishingly beautiful results. Through illustration and modeling software such as 3DS Max, Mudbox, and Photoshop, the developer has managed to fully take advantage of the current powerful graphics cards, as well as the 1024x resolution textures. It is evident that the majority of the texture pack’s success is due to the incredible lengths of hard work the creator has invested.

Where Can I Use The Realism Mats Texture Pack?

The texture pack utilizes top of the line technologies and requires free SEUS PTGI shaders, which all need to be fully managed by the user’s PC to be on the receiving end of a realistic, and immersive experience. Therefore, the texture pack has been specifically made only available for players on the Minecraft Java Edition 1.12.2 / 1.14.4 / 1.15.2 / 1.16 / 1.17 / 1.18, as consoles simply aren’t equipped with hardware capable of running such an intensive texture pack but the creator is already working on a new version to support the upcoming Minecraft with RTX.

How I Can Get Realism Mats Texture Pack?

If you’re seeking to purchase this you would have to contribute to the project on Patreon by joining the Diamond Supporter tier ($8), which is incredibly inexpensive considering the realistic experience you’ll have to yourself in return.

What Can You Expect (Screenshots)

Interested in what you can be expecting? Scroll down! Listed below, are several screenshots showcasing what you can anticipate when using the texture pack yourself. If you’re looking to receive the exact same results, you will be required to download free SEUS PTGI shaders.

Shown below, are images from vanilla Minecraft compared to Realism Mats:

First and foremost, in this screenshot, the difference between the bookshelves are night and day. On one hand, from the vanilla Minecraft version, we can clearly identify the distinct bookshelves we love. While when switching to Realism Mats, the textures have been completely turned into practical bookshelves, filled with a different, random assortment of books, placed in odd positions to simulate real-life bookshelves. 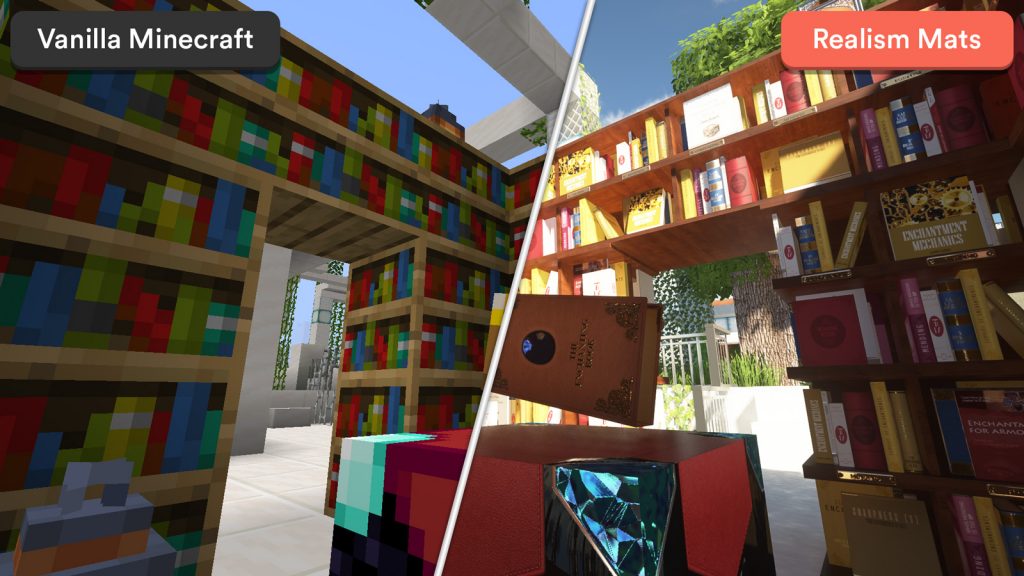 Another neat feature is that the books will have different book covers, in reference to the Minecraft Enchantment system. The metallic labels also have different names of enchantments, giving the user a more immersive and realistic adventure to embark on.

In the next image, it is evident that the tracks, cart, Redstone, and even the background grass and trees have all received an immense upgrade from the original vanilla Minecraft version. The Minecart & track reflects flawlessly off the surroundings, the track has transformed from regular cardboard-styled tracks into actual railway tracks that look and function gorgeously, while Redstone has been converted to wires. 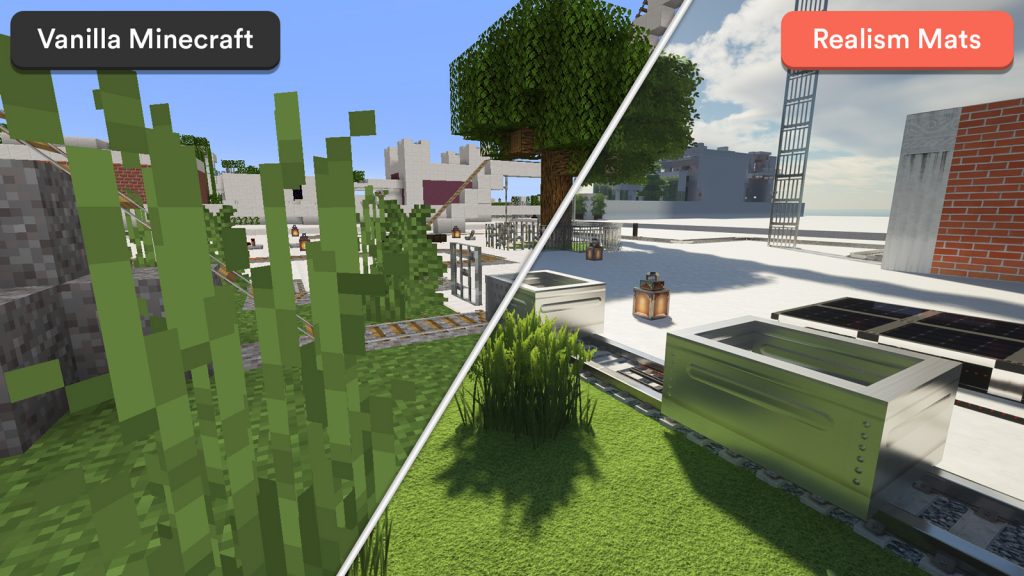 All-in-all, this is a perfect representation of what the shaders and Realism Mats texture pack are capable of achieving when combined. Thanks to the high resolution, we can now achieve a more distinct look and obtain more accurate, and precise shadows.

The nature aspect of Minecraft has remained as one of the most prominent ones, and it wouldn’t be easy recreating the iconic trees, grass, and dirt blocks that we’re used to seeing. Firstly, the leaves on the trees look less blocky, and instead, thicker, and as for the colors, they look more vibrant and realistic looking.

As for the grass, they have been retextured to look 3D, restructured to look thinner, and each strain of grass has incorporated different properties, such as different sizes, height, and placement. The dirt blocks remain blocky but still manages to capture the realistic image of actual dirt blocks, by replacing the pixelated texture, to a higher definition of dirt texture.

Next, the image below showcases the fascinating sand texture. Instead of being a singular block, the sand spreads out, creating a sand pile on the side of the road, giving it a more lifelike and genuine aesthetic. 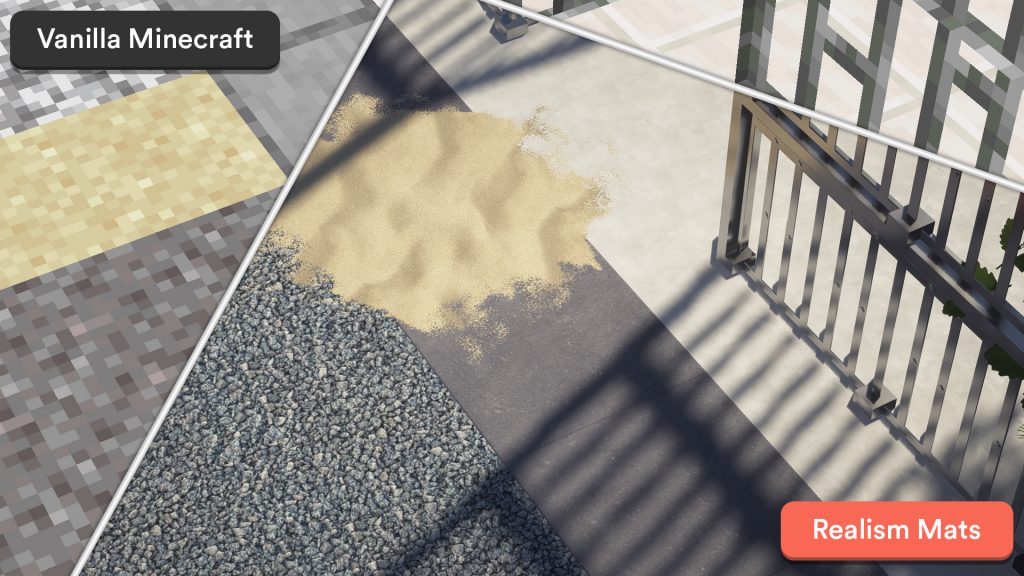 As for the gravel, instead of using pixelated textures, the creator utilized pictures from actual gravel and enhanced them to look crisp, distinct, and overall a high resolution. The fences also have been completely re-done; going from the original design to one that looks more conventional and realistic. Another thing to note is the vines and leaves. The original leaves and vines are blocky, while on the Realism Mats texture pack, they look thinner, sharper, and more practical.

Lastly, in the picture below, the original iron, gold, and diamond textures have been reconstructed to look more attractive, precise, and captivating. The textures on the Realism Mats texture pack allows for sunlight to reflect off the texture seamlessly, giving you a more immersive and realistic experience. With the Realism Mats texture pack applied to the armor sets, they look less blocky and simple. Alternatively, they have a more majestic, and grand appeal to them. 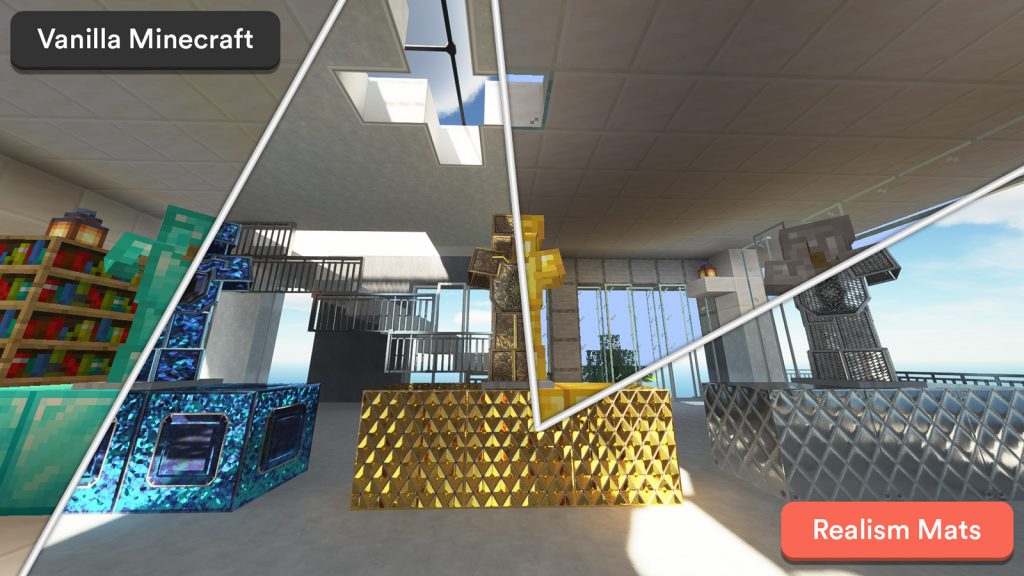 To think that those few images only showcased a few aspects of the texture pack, you can try it now here: Realism Mats.com

Nevertheless, if you appreciate this project and would love to use it in your Minecraft playthrough, be sure to support the creator. 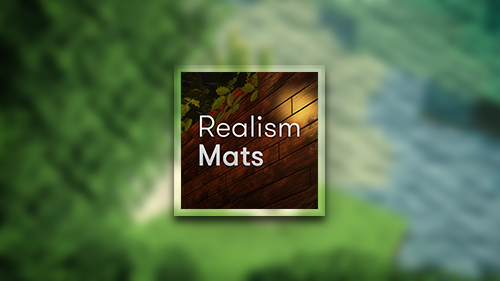